This will go down in history as the longest summer EVER. The kids haven’t had school since June 13, the teachers strike is now threatening to delay the start of the new school year, and my contract at work ended August 1, so I’m home with my little darlings 24-7. On our latest trip to the library I found a book called “You Can’t Drink All Day if You Don’t Start in the Morning” — am I the only mom who finds that inspirational?

Actually, the kids haven’t been that bad. I’m just having trouble adjusting to life without either educational courses or paid employment. I don’t know what to do when I don’t have deadlines. We’ve been to the beach, and the waterslides, and the mini golf course; we’ve had BBQs and play dates; I’ve even gotten out golfing a few times. But none of that stretches me intellectually. I need to work on developing some new skills…which I plan to do if the kids ever go back to school. Sigh.

Speaking of new skills…Brayden’s printing is finally improving, and he’s getting better at tying his shoes. He went to overnight camp for the first time this week and seemed to love it, although he was so filthy when I picked him up that at first Justin thought he’d had his face painted (eww). He lost a tooth a couple nights ago and was super excited that it bled enough for him to gross out his brother. That one is all boy.

Justin hasn’t had any therapy all summer but seems to be doing great, which makes me wonder (not for the first time) if he really needs the extra help. He didn’t seem bothered when he lost a couple games of Battleship the other day, and he was genuinely excited for me when I got a hole in one in mini golf even though he didn’t. Handling defeat has never been his forte, so this was a big deal. Very cool. 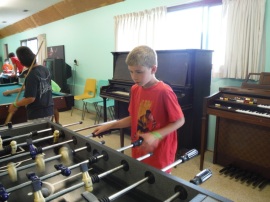