Thanks to happy circumstances combined with basic human greed, we have now become a three-iPad family. Let me explain: Justin had some surplus autism funding that had to be spent by the end of March, so I asked his team about resources that would be appropriate for him. His speech pathologist (bless her heart) offered to authorize an iPad and some apps. I hesitated at first, since Chris already has an iPad and we could’ve just put new apps on there, but the promise of a free iPad wore me down. I didn’t tell Chris what I was doing until I got the OK from the funding people, and even then I waited until the stores were closed so he couldn’t run right out the door.

So we bought a 4th generation iPad for Chris, gave his old one to the boys…and bought an iPad Mini for me (along with a keyboard and a camera connector…but let’s not dwell on the details.) The Mini replaces my netbook and my Kindle, so I managed to consolidate devices, plus it’s way lighter, cuter and more portable than the full-size iPad. We had to pay for this one ourselves, of course, but Chris never hesitates to spend money on technology, so everyone came out of this happy. 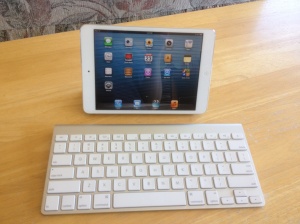 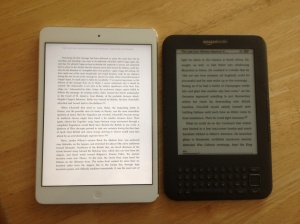 It’s the size of my Kindle

1 thought on “Damn That iPad Itch”