I know many parts of the country had a white Easter (ha!) but we had an unbelievably beautiful one — no clouds, lots of sun, and temperatures in the low 20s. It just doesn’t get any better than that at the end of March!

The boys were super hyper all weekend because Uncle Greg was in town from Prince George. Uncle Greg used to live here in Kelowna and saw the boys all the time (he was our go-to babysitter cause he would do it for free and he was almost always available…it was a sad day when he got a job up north). Justin’s always been particularly attached to Greg, so he was beyond thrilled to have four days with him; he was also beyond upset when Greg had to go, but he seems to be over that now.

Back to school tomorrow!!! 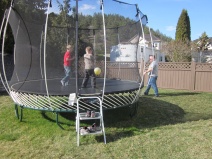 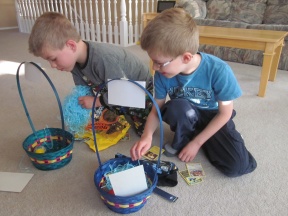